Julia
Yes, I do laundry. But the title of this blog comes more from the mixed bag of roles that make up my life than from the dirty clothes that fill our closet. I never set out to 'have it all', which is a good thing, since what I've been given is much richer than anything I could have searched for.

Please don't feel shy about leaving comments or emailing me. My email address is:
LotsaLaundry1 AT gmail DOT com

Our Cast of Characters

My Book for New Moms

I also blog about growing in faith at Seeds of Devotion.

Working at the margin

One of the best insights in the book Switch was the observation that when we have a crater-size problem we tend to look for crater-size solutions. The authors point out that this is a mind trap: there's absolutely no rational reason we can't fill a crater with small stones.

There are a lot of situations in life we can approach one pebble at a time. In fact, with the bigger problems we have to do this. We aren't strong enough to heft boulders and meteorites. We often don't know where to find them. And there are pebble-size things everywhere.

Sometimes when we face great difficulties we feel helpless because we can't do anything substantial to make things better; the only things we can do are at the margin. There are two things I'd note about this:

First, wounds heal from the edges. They don't heal all at once; they start healing at the margin. If you can do something about the margin, it matters.

Second, what happens at the margin isn't always visible. What you do isn't going to give you the kind of satisfaction you get from cleaning a closet or painting a wall. Nonetheless, it matters.

Life here has been so over-the-top lately that it defies description. On Wednesday, however, a thin beam of sunshine made its way through the darkness. It is amazing how much  of a difference that can make.

I think sometimes about how a handful of stars in the night sky are a comfort, even if they don't illuminate your path. The thing is, you have to look up to see them. If all your energy is focused on your feet, on not-stumbling, you miss the solace and light that's given to you.

I do believe feet are important, however. I mean, an awful lot is possible -- way more than we think -- when we concentrate on always taking the next step. Paralysis keeps you where you are, which usually makes matters worse. As Winston Churchill said, "When you're going through hell... keep going."

Sometimes our feet have more faith than our hearts. Sometimes, when hope is hard to come by, our feet keep us moving along the path of helping and serving and praying. They take us places and keep us doing the things we must do, even when we don't feel motivated or charitable or inspired.

People (myself included) make the mistake of thinking everything has to start from the heart. It's not so. Sometimes when we go ahead and do what needs to be done, eventually our heart catches on.

Andrew and I celebrated our 20th anniversary yesterday. It was a quiet celebration, crammed in between appointments and work and crises. Dancer made an almond cake from one of my favorite cookbooks, The Foods and Wines of Spain: 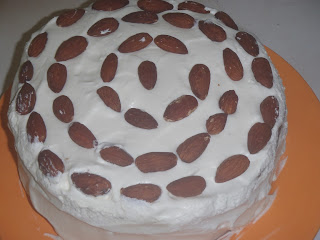 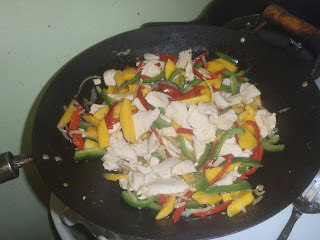 Andrew brought tulips and a bottle of wine. The kids raised a toast to us with sparkling cider. We didn't eat until late because of a plot twist with my PTSD child, who suddenly has intense paranoia. For a while we thought we'd be non-celebrating in the ER. And then this morning it looked again like we were on our way there. But so far we have squeaked past that. Could be a side effect of meds, could be something new.

We had a piece of good news today: the College Board granted all of our requests for accommodations for the SAT for Big Guy. We'd been told the best chance of success would be to be able to include a letter from his doctor outlining the specific medical reason/diagnosis for each accommodation needed. Big Guy takes the test in June.

Which reminds me: I need to buy gauze today for his infected toes. Yes, I know that's a non-sequiteur.

I haven't felt like writing lately, which is odd. There's too much going on, with too many people, on too many levels, to filter it all and order it into words and sentences and paragraphs. Yet one of the main ways I make sense out of chaos is by putting it in words.


Little Guy's end-of-year standardized test arrived the other day. I stared at it, astonished that I'd remember to order the thing. This is the kind of thing that, pre-children, I never would have known could make a mother happy. Really? You're proud that you remembered to do something that's been on your to-do list for a month?! Yes, really.

The subways in our part of town are deep underground, so deep that there are large elevators to bring you to the surface. On Tuesday night Little Guy, two Cub Scout friends, and a Cub Scout dad and I got onto the elevator on our way home. As the doors closed a white man suddenly yelled at a tall young black woman, "Why do you keep pushing me?" She smiled weakly and gave him an I-don't-know-what-you're-talking about look; it was clear she didn't know him, and was taking the New York approach to avoiding conflict. Then he whacked her take-home dinner out of her hands and onto the floor, and started yelling and punching her.

People immediately intervened. He stopped, but then started again. At one point (it felt like a long elevator ride!) four of us had him backed against the wall, and yet he was still shouting at the woman. I could smell alcohol on his breath. He barely seemed to notice that he was surrounded; he still wanted a fight.

The boys, thankfully, could not see what was happening because they were on the other side of the car. I could hear them shrieking, "I'm scared!" When we finally got to street level one said, "Let's get out of here!" and they took off. I was relieved; you never know which way fear will go, and it was better that they were out of the way than frozen in place. I later learned that someone told them to stick together. They did.

As the car emptied, five of us stayed to make sure the woman was able to get off safely. The drunk was still ready to charge at her. It took a minute or so for us to get off the car, then a couple of minutes to get out of the station vestibule. When we finally got outside, the drunk was still trying to continue the fight. At that point the woman took a picture of him with her phone; he whacked the phone out of her hand. I called 911. A young man took off his backpack and offered to fight the man if he wanted a fight. The assaulted woman urged him not to. He listened to her.

The police arrived, and the good people of my neighborhood, the ones who immediately stood up for the woman, who stayed to keep her safe, also stayed to talk to the police. It's not enough to just place the call; if the police arrive and no one is there to act as a witness, there's not much they can do.

At some point in our lives, most of us accept that we can't control everything. There are people who do bad things and make bad choices, and the best we can do is choose to do the right thing in response. I was very, very glad to live in my neighborhood on Tuesday night. People chose to do the right thing. The woman will have to live with this crazy memory, but she'll also have the memory of people helping her, protecting her, sticking by her.

Little Guy is nine, and he doesn't have that kind of perspective.  It was a scary situation, and he was terrified. "I was scared the man was going to hit you, Mommy!" he told me later. Well, yes. That was a possibility. The guy, in fact, did take a swing at me (though my son didn't see it).

I told Little Guy this was the first time I've ever seen something like this in my 25 years in New York. That didn't provide much comfort to him.

Little Guy said, dozens of times, "I'm scared!" I eventually said, "You sound like a CD that's gotten stuck!" He laughed. I suggested amending the thought, as in, "I'm scared... and I'm okay" or "I'm scared... and everyone did the right thing." It was a good idea, and for a less-anxious kid it might have worked.

I talked him through all the good things that had happened: that people made good choices, that they helped the woman, that they came forth as witnesses, that no one was seriously hurt, that he and his buddies made a good decision to get out of there, that the police were helpful. I asked him to think of the things he could be thankful for. That took the edge off his fear... momentarily.

I had him do his deep breathing. We identified the thinking traps he was in ("it will always be like this" and "expecting bad things to happen"). We prayed for the people involved, including the drunk man. Finally, he went to sleep.


I was talking to my PTSD kid's home therapist (someone comes to our house on the days we don't visit the regular therapist), who noted that if you have three babies in a room and a book falls on the floor, one may wail, one may startle, and one may barely notice the sound. We each have an innate sensitivity to things that cause distress. With babies, adults tend to respond to this sensitivity as a need, picking up the wailing infant, perhaps patting the one who startled, and merely smiling in the direction of the low-maintenance child. With kids, we tend to view it as a character flaw, or at least as an annoyance. As children get older, we somehow expect things to equalize. They don't, necessarily. At least not without help.

People also differ in how long it takes them to "return to baseline". If three babies respond with equal distress to a stimulus, one may recover in a few moments, another in a few minutes, and still another after ten minutes. It helps to know that this is innate as well, because it frames the problem of a slow-returner differently, perhaps lowering the likelihood of parental exasperation. We tend to expect that by a certain age all kids will get over an upset within some remotely reasonable timeframe. Not all do, or can, without tools to help them.

Note that none of this is a matter of the child being "not normal" -- their responses to fear are entirely normal for them. The issue to focus on is how to help the child become more functional. A baby needs mom to soothe her; a child needs mom to help her learn how to soothe herself. Kids who have a naturally slow return to baseline need techniques to help them re-frame situations and calm themselves a bit faster.

Fear happens. So does recovery from it. Eventually.